AfriNuke is the AYGN he triannual bulletin which aims to provide a platform to highlight the activities of the organization while capturing some events in the nuclear industry. The first issue was release in 2019. African Young Generation in Nuclear (AYGN) Communication Committee is glad to release the FIRST ever issue of AfriNuke Bulletin. The newsletter wouldn’t be possible without the contribution and dedication of leadership, national chapters, members and stakeholders. AfriNuke has recently launched a special section dedicated to profile young and old professionals in the nuclear industry.

If you have that story you would like us to publish or a professional you want us to interview, please feel free to contact the editor. 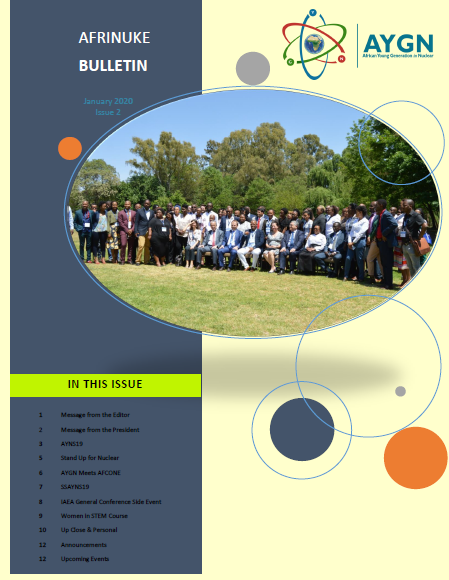 Up Close and Personal

Up Close and Personal with Mr. Abraham MITI, Counsellor (Administration) of Embassy of Zambia in Italy

AfriNuke got Up Close and Personal with Abraham MITI, Senior Diplomat at the Embassy of Republic of Zambia in Rome, Italy as he shared his experience in so far and other critical issues.

Abraham served as the Chairperson of Local Organizing Committee during AYGN Conference on Enhancing Nuclear Safety, Security and Safeguards in SADC Countries which took place in Lusaka, Zambia, August 2018. He also served as a Deputy Chairperson of Zambian Young Generation in Nuclear (ZYGN) before he left for Italy.

It has been almost a year since you left Zambia. Have your impressions of Italy changed since day one? Are you more or less enthusiastic about Italy and your role here?

First of all, I would like to express my profound gratitude for being selected as the first person to be featured on the profiling space in this wonderful initiative to put nuclear science and technology at the centre of Africa’s development. It is really an honour.

Indeed time has just flown by. It is almost a year since I took up my position as Counsellor (Administration) at the Zambian Embassy here in Rome. As the Senior Diplomat, I have found Italy to be amazing. As you may be aware, this is my first posting as a Diplomat and so, there has been a lot of learning involved. However, having worked in the nuclear industry and the multinational nature of the trade has prepared me well. I have settled into the role and thoroughly looking forward to many more exploits.

Italy is a wonderful place, full of history and warm welcoming people. I am lucky to have been given the great honour and priviledge to serve my country in the historical city of Rome. Like the say, “All Roads Lead to Rome”. The nuclear industry has led me to Rome and I shall serve my country diligently.

Tell us about your personal background and how relevant your career is to the issues of nuclear science and technology in Zambia and Africa at large.

My personal background is rather humble. I was born of a family of 12 from Mr. Wyson and Mrs benedether Miti. Growing up in a shanty compound was certainly not easy. But like an adage goes, “education is the best equalizer”, I was lucky to get good grades at secondary school and with the support of my family, I went to the University of Brighton for my Undergraduate Degree in Business Law. I later went to the University of Leeds to read for a Master of Laws (LLM) in International Business Law. However, my first brush with the nuclear industry came when I was invited to attend a symposium on the Additional Protocol to the Vienna Convention during my time at the Ministry of Justice. I was intrigued by the subject and technology of nuclear science. Thereafter, I proceeded to attend many other courses in nuclear science and technology focusing on the legal and regulatory frameworks culminating into the award of an Advanced Diploma in Nuclear Law from the International School of Nuclear Law at University of Montepelier, France.

Arising from my interests in the subject, the Attorney General of Republic of Zambia nominated me to represent him on an ad hoc committee appointed by the Secretary to the Cabinet to explore possibility of Zambia embarking on a nuclear programme. I proceeded to represent my country at various negotiation meetings and thereafter I was appointed as a lead negotiator (legal) for the contract to construct the first ever Centre for Nuclear Science and Technology in Zambia. I was thereafter appointed as the Head of Legal and Regulatory Directorate in the NEPIO. Subsequently, when the NEPIO underwent some changes in readiness for the creation of the Zambia Atomic Energy Corporation (ZAMATOM), I was appointed as the Director responsible for Corporate Affairs before my eventual appointment into Diplomatic Service.

What are your main objectives over the next couple of years while you’re here in Rome?

Of course, my main objectives in my current role as the Counsellor Administration is to support my Ambassador achieve the aim of improving Zambia’s bilateral relations with Italy and the countries of extra accreditation. The Mission where I am currently serving is accredited to Malta, Greece, Cyprus, Albania and Croatia. The Mission is further accredited to the Food and Agriculture Organization (FAO), World Food Programme (WFP) and the International Fund for Agriculture Development (IFAD).

We followed your media interviews during your tenure at NEPIO and noticed your patriotism as a Zambian, accompanied with passion for nuclear science and technology. We know Zambia is in a process of constructing the Centre for Nuclear Science and Technology (CNST). Would you say your current position her puts you in good place to leverage Zambia’s benefits from the United Nation (UN) Agencies located in Rome to ensure that the irradiation facility at the CNST will be utilized for value addition or the agricultural produce in Zambia?

The multilateral institutions which are accredited make me very excited about the possibilities for collaboration. As you know, utility for Centres for Nuclear Science and Technology are at the core of the success or failure for such infrastructure. In this regard, I am very excited to start the conversation with FAO, WFP and IFAD so that we solicit technical support to ensure that the irradiation facility at the CNST is fully utilized.

In your opinion, how will the establishment of CNST impact Zambia’s economy as well as the national attitude towards acceptance of nuclear?

The establishment of the CNST will massively impact on the food security of Zambia primarily. One of the most perennial problems faced by Africa is the amount of food that goes to waste because of lack of facilities such as the irradiation facilities to be built at the CNST. Additionally, there is also added advantage of access to international markets for agricultural produce which comes with the irradiation facilities like the one envisaged at the CNST. However, I also need to mention that the CNST will house the state of the art Nuclear Medicine Centre to treat the increasing cases prevalent on the African continent at present. So the benefits of the CNST are quiet profound both on the economic side as well as on the social side.

In 2019, 30 students in Zambia were selected to go study nuclear science in Russia. What is your message to them and to the whole ZYGN? 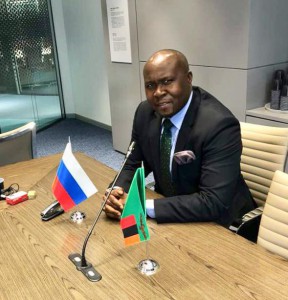